View Cart “DVD: Container 158 by Stefano Liberti and Enrico Parenti” has been added to your cart. 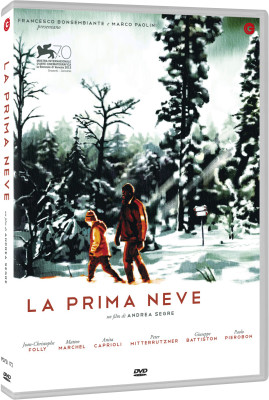 The first snow fall is the one we all expect in the all valley.
It is the one that turns the colors, the shapes, the contours.
Dani, however, has never seen the snow.

The first snow fall is the one we all expect in the all valley.
It is the one that turns the colors, the shapes, the contours.
Dani, however, has never seen the snow.
Dani was born in Togo, and he’s arrived in Italy fleeing the war in Libya.
It is host to a reception center in Pergine, a village in the mountains of Trentino, at the foot of
Val Mocheni. He has a daughter of one year old, but he can not deal with. Is there anything that stops him. A deep sorrow inside him.
Dani was invited to work in the laboratory of Pietro, an old carpenter and beekeeper in Val Mocheni. Pietro lives in a mountain farm with his daughter in law Elisa and his nephew Michele, a 10 year old boy whose restlessness immediately affects Dani. Michele’s father has just died, leaving a large emptyness in the boy’s life.
Michele lives with conflict and tension the relationship with his mother and tries instead support and friendship in his uncle Fabio.
The snow will come along and there won’t have much time to repair the hives and collect the wood for winter. A short time, which allows pain and makes silences become occasions to understand and learn. A time to let that leaves, trees and woods prepare theirselves to change. At that time and in those woods, before the snow, Dani and Michael will learn to listen to each other.