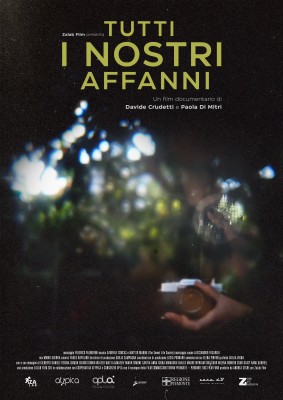 On March 9, 2020 in response to the exponential growth of COVID-19 cases, the Italian government makes self-isolation mandatory.

During this period, seven of the twenty-five apartments making up Luoghi Comuni – a project of social housing in the neighborhood of San Salvario in Turin – begin to express themselves with their own camera.

Job insecurity, instability of affects and loneliness do emerge.

A single building in Turin becomes a window on many different worlds: Anna, Mamadou, Waleed and Ajmeen, Simone, Gil, Sister Miriam, Sister Daisy, Sister Milena, Regina and Gideon. These worlds are sharing the same uncertainty, the same anxiety for the future, taking refuge in the past and in the most intimate affections to face the uncertainty of the present.

At the end of February 2020, for some personal reasons related to our life trajectories, we find ourselves living in the temporary residence Luoghi Comuni of San Salvario, in Turin.

From the first day spent in our apartment, we realized how the building is not a usual place, due  to the variety of people living it, with social and geographical different backgrounds, all sharing a maximum stay of 18 months.

When on the night of March 9 the Italian government ordered all citizens to stay in their homes to counter the advance of COVID-19, we are in our living room as every night. Up to that moment we didn’t know practically any of our neighbors.

It seems to us, however, that everyone is moving in the same state of uncertainty in which we are. So we get the urge to wonder how everyone is doing, now that everything is at a standstill.

We have an idea: we propose to the residence managers to deliver handy-cams to the inhabitants and we try to describe the residence life through a remote workshop of Participatory Video.

Many of the inhabitants accept to participate.

As we give them videocameras, they put their lives on the line, questioning themselves, trying to figure out how they are doing: what goes on and what does not, what they want and what is scaring them.

We notice that the time which seems suspended, actually it is not. The lives of the inhabitants in the residence add up, lean one onto another, and little by little begin to sew together. The apparently motionless residence actually is teeming with situations, lives, projects and delusions.

The handy-cams that the inhabitants keep on the nightstand before going to bed, that are forgotten turned on while having lunch at the kitchen table, that are used for filming the wisteria under the window or the synagogue in front, become important tools to give meaning and shape to thoughts. The daily life scenes, the video calls with more or less distant affections, the night reflections on themselves and with themselves do transform into a choral self-narrative story of a unitary building.

For our part, we continue to follow the developments of the protagonists’ stories on a daily basis, asking them to send us the new shot material for giving them feedbacks and new indications.

All Our Worries is then a film that originates from a partial transfer of the camera to get to see reality through the eyes of those who film it. The protagonists’ self-narration aims to return personal worlds capable to delve into the intimate, describing various and distant contexts.

All Our Worries was filmed from March 9 to May 18, 2020 during the first lockdown. However it is not a film about the quarantine, rather a film originated in the vacuum time which the latter has granted, to get into a residence and the lives of its inhabitants, looking for ideas on the human condition in the protagonists’ narratives; to describe a building in Turin center as a small microcosm able to become universal.

In collaboration with
Cooperativa Atypica and Consorzio Oplà