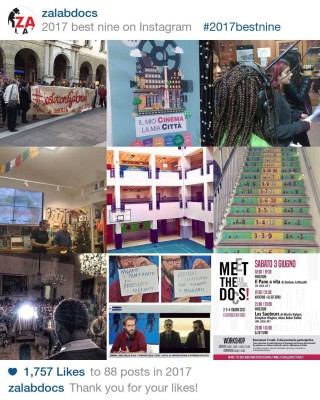 2017 has been for ZaLab a year full of stories, projects, meetings.

This photo collage shows 9 important moments in our year:
– #Iostocongabriele: the campaign for the freedom of Gabriele Del Grande;
– the movie festival “Il mio cinema, la mia città” realized in June thanks to “MigrArti” project;
– the workshop of partecipatory video “Flying Roots“, realized thanks to Evens Foundation;
– FuoriRotta project, sustained by Montura;
– fuoriClasse International Tour, realized thanks to Siae;
– Ibi‘s photos exhibition, wich has been inaugurated at Reggia di Caserta;
– L’ordine delle Cose, by Andrea Segre, which tells about prisons for migrants in Libia and the role of Italy in the traffic of human beings;
– Meet The Docs Festival.

This year has drawn new paths for ZaLab, and we wish to go through them again, altogether.