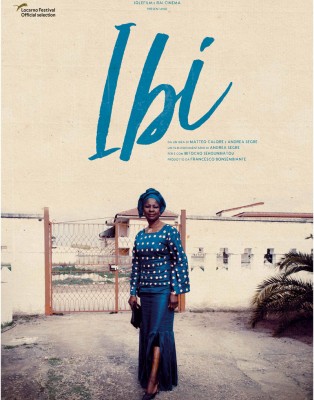 Ibi took pictures and filmed her life in Italy for over 10 years.
This film is born from her images, her creativity and her energy.
For the first time in Europe, a film is entirely based on the self-narration, direct and spontaneous made by an immigrant woman telling about herself and about her Europe to her sons in Africa.
This is an intense and intimate journey into the difficult, lively and colorful world of a visual artist, who was unknown until now.

Ibi  was born in Benin in 1960. She had three children and in 2000 decided to take a big risk in order to give them a better future. She left them with her mother and accepted to transport some drug from Nigeria to Italy – but she didn’t succeed.
Three years spent in jail, in Naples.
Once released she stayed in Italy, unable to see her children and her mother for 15 years. She started to film her life in order to make them understand what it was like. She described her life and her house in Castel Volturno, where she lived with her new companion, Salami, and Italy where she tried to get her dignity and hope back.
This film was made starting from the images Ibi shot.

I met Ibi in Castel Volturno three years ago, in July 2014. She was planting some African chili peppers in her garden.
Ibi was born in Benin and lived on the Ivory Coast until 2000.
She was a tall, strong and dynamic woman. She was a francophone and Muslim, African Muslim, detached from the modern-day aesthetic stereotype of Islam which has been imposed by the media. She had three children and, following some severe economic problems, in 2000 she decided to take a big risk in order to give a better future to her children. She left her children in Benin with her mother and accepted to transport a huge quantity of drugs from Nigeria to Italy.
She didn’t manage to succeed. Border control quickly understood something was wrong with her, they found the drugs and they arrested her. Three years spent in jail, in Pozzuoli, Naples.

Three extremely hard years for Ibi, far away from her children and unable to help them in any possible way. Stuck with the destiny of an illegal guilty trafficker.
Nevertheless, those three years deeply changed her character. She met a voluntary social assistant, who helped her find an alternative path for her sentencing.
Thanks to her good behavior, at the end of the third detention year, the judge decided to grant house arrest to Ibi, but Ibi didn’t have residency or a home in Italy, so in turn she was hosted in an unique halfway house, dedicated to the singer Miriam Makeba by the Comboni Missionaries in Castel Volturno – the largest African community in Europe, where ‘Mama Africa’ died in November 2008.

During these years, Ibi met Salami, a Nigerian man with whom she fell in love with; she decided to marry and share with him the efforts and the sacrifices of her new difficult life.
She had three major concerns: her children, her residency permit and the wish of restoring an ordinary life.
A new deep passion made them all merge: photography.
Ibi started to take pictures, to shoot her own life and the life of her new community, made up of over 10.000 African people, who were reshaping the human geography of the seacoast area around Castel Volturno. In fact, they started to live in hundreds of holiday-homes, which had been illegally built by Naples’ and Caserta’s inhabitants during the 80s and the 90s, and they soon became labourers in the Non-contractual credits fields of agriculture and construction industry, often concerned with the criminal interests of the
influent Camorra clans controlling that area.

In the midst of this transformation, Ibi continued to take pictures and document the changes. She did it in order to start over and earn money from her photos of weddings, baptisms and religious ceremonies (Catholic, Evangelic or Muslim ceremonies).
She did it to help and support the Migrant and Refugee Movement, which she joined enthusiastically together with Salami, not only in order to get her residency permit, but also because she firmly believed in the need for a joint struggle against the injustices that bound the majority of the migrants in Castel Volturno.
But she mainly filmed so she was able to show her children and her mother, who were distant and unreachable, about her life: without a residency permit, Ibi couldn’t join them and didn’t want them to leave, as she had.
Caserta Police Headquarters postponed Ibi’s convocation to the National Commission for Refugees.
When she was finally admitted to the Commission, despite her remarkable social and civil commitment, the President decided not to grant the residency permit, because her criminal record was too cumbersome and no one had enough political bravery to overcome it.

Ibi suffered the backlash. She felt humiliated, but she wouldn’t stop.
She continued to fight and, above all, to tell stories.
She has documented her world for over seven years.

If you had asked Ibi why she felt like a representative for the Movement, she would have responded that this happened because she had learned that “impossible doesn’t exist” and she fostered objectives that had seemed “impossible” before and that had then become credible, like coming back home and hugging her mum.
She took part in dozens of demonstrations, she had been shooting for hours and hours, she took hundreds of pictures and she continued to make up her virtual world, while teaching herself how to represent herself with her children on large colorful posters designed with Photoshop. She looked cheerful in those images, next to her children and her old mother. “Resist, mum, don’t leave, they will give me the residency permit in a while and I will join you soon. Don’t leave before”.
In April 2015 unexpected good news arrived. The Commission decided to call Ibi again and told her that she would have an appointment fixed soon – she was overjoyed.
However, destiny is ironic and tragic.

At the end of April Ibi started to feel sick – weak, tired and dizzy. On May 8th, in the middle of the night, Ibi got breathless, shaking and in a cold sweat, she was admitted to hospital but tragically she did not make it: on May, 19th 2015 Ibi died, in her husband’s arms, without obtaining the right to live in Italy and to go back home.
Today Salami still lives in Castel Volturno in the house where he used to live with Ibi for more than 7 years.
One can feel the absence of Ibi in every corner of that house and all the time.
Salami works as a mechanic in the courtyard and he is often alone with just his memories. He still takes part in the Migrant and Refugee Movement, but every fight is also the symbol of his
sorrow.

Many images shot by Ibi are included in the film; film editing has been guided by the understanding of what happened to Ibi (or better what is happening, in the present time of her filming), and by theappeal that Ibi’s ethical and aesthetic stance tells. We want the audience to follow Ibi’s first-personpre-narration, by staying with her and not by experiencing her as an object, as a third-person witnessof injustice and pain. Ibi has suffered, but overall she has narrated, fought and smiled all the waythrough.
The audience will spend time with her, even though she is not here anymore. The absence of Ibi is what our images tell: Salami’s daily life in the empty house; the world of CastelVolturno around that house where she filmed and lived; the silence of prayers and sorrows. Thememories are not intended to be a didactic narration, but they should be the moments where the
absence of Ibi materializes.
Ibi isn’t here anymore, she didn’t have the chance to succeed in her prayers, seeing her children andher mother once again, or to have had the right to redemption and the possibility to travel. Her not being here makes the story even more tragic. However she is still alive thanks to what she has left us, thanks to Salami’s love for her and thanks to what she tried to convey to those she loved, herself and also the world. Ibi isn’t here anymore but the world Ibi fought against and chose to live in, that world is still here, and it has to show the courage to stop and think about what Ibi was able to teach.
Andrea Segre

Based on an idea by Matteo Calore and Andrea Segre
Directed by Andrea Segre
With the images of Ibitocho Sehounbiatou
International Sales: I Wonder Pictures

Produced by Francesco Bonsembiante
A production JOLEFILM with RAI CINEMA
in collaboration with ZaLab
with the support of Open Society Foundations
International Sales: I Wonder Pictures World Sales